We are bringing regular personal interviews, so you can get to know more about the Ashborne Family and its members. This time meet Jan Mareček, a Gameplay Programmer currently programming gameplay systems for our unannounced project. 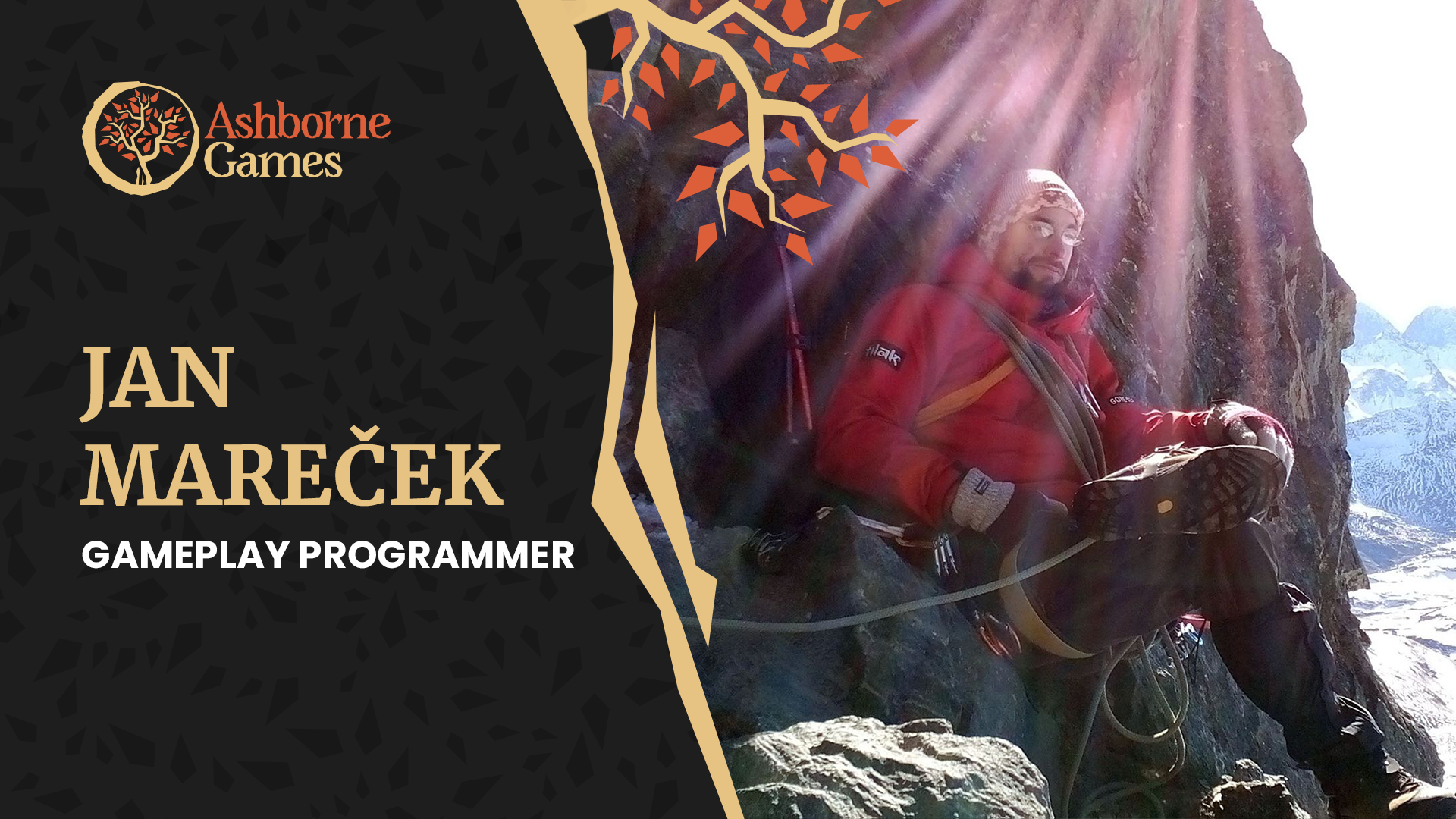 Tough one. I think I am the walking proof that you don't need to be superhuman to survive in the game industry. :-) After 15 years in the business, I can proudly say I have nothing in extra to offer and am still standing. I am just an average guy with a moderate skill set. My leads call me senior, my paycheck calls me senior, but no one cares if I genuinely am a senior. But already survived seven lead programmers in my career, so maybe my superpower could be to be able to swim with the flow :-D

How did you become a gameplay programmer?

I didn't know that the gameplay programmer is a real deal. I always assumed that I do tasks around core gameplay because leads think that I am not the sharpest pencil in the case. I am too dummy for math and too lazy to study low-level engine stuff. And one day, suddenly, I am not just poor but a gameplay programmer :-). No really... I did my first game when I was seven years old. It was on a good old PMD 85 - Czech computer with 8080 CPU made in Tesla Piestany in the dark communism ages. I continued and made several games until my first year at the university when I had my first and last job interview. It was in the Altar games, which later became part of Bohemia Interactive. I failed, but they had no one else to hire, so I got one month of a trial period. I was utterly useless, but my supervisor who hired me took a trip to South America to find himself and eat guinea pigs, so I stayed under the radar for a couple of months and allowed me to do my homework and become a programmer. I told you... Swim with a flow. Just swim with a flow. ;-) 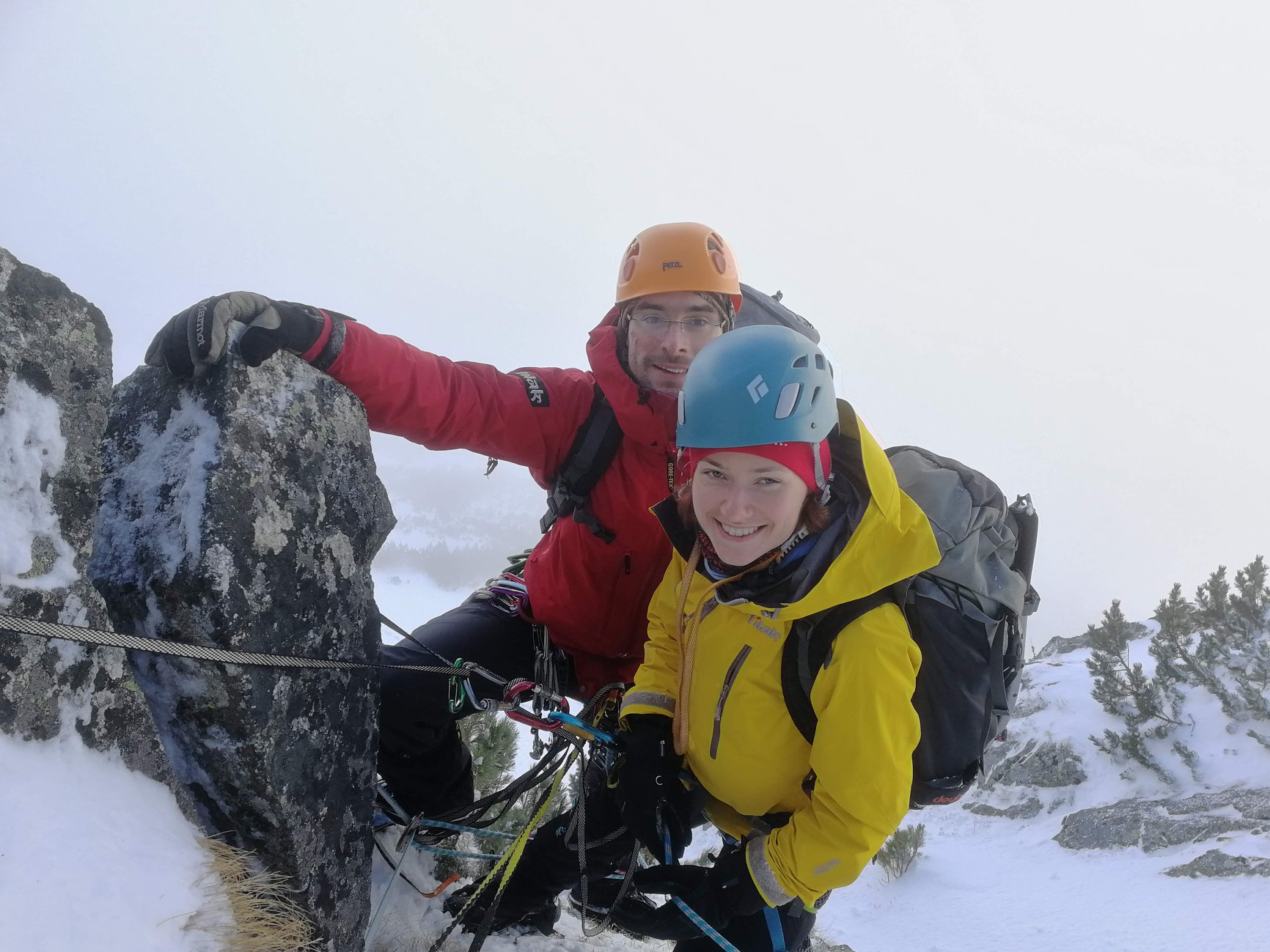 I don't care that much about a project itself. I do care about the people whom I work with. And since I had luck with the people around me, I enjoy every project I've been working on.

But If I should pick one, my favorite game would be Bambeřice. I made the puzzle game back in the days at a high school as a first-year project in Pascal. It was a classic slide puzzle game in which I got a picture, split it into 5 x 5 matrices. You had to move the blank space around and place messed pieces back on their original positions. The thing is that I chose pictures of girls with minimum clothes, and the count is reducing furthermore as you progressed in the game. Yeah, I know it is pubescent, but I was 16 and could load 16bit TGA pictures in pascal on 320 x 200 pixels in a 256 colors palette, and most of the code was in assembler, so that no one could say a single word. And because no one even tried to understand the code, so no one noticed that I ran a shell command on the background, which registered a keylogger service on a teacher's machine. It was super handy because he knew the password for a proxy server that gives us access to the internet. It is 20 years ago in the dial-up times, so come on, guys – The Internet!

I prefer shooters, but if I had to pick the RTS game, the choice would be Starcraft 1. I used to play it on Battle.net for months. The perfect combination of fast-paced action and strategy was the cocktail for me. I watched replays, studied tactics, etc., so yes, Starcraft it is.

I like mountain climbing. I am not good at it at all but still love it. It is not a competition. I enjoy the time in the mountains. No deadlines, no producers, bugs, and stuff. Just me, my wife, limestone, and nature. Luckily Brno is quite near to Austria and Austria with the Alps is the place of my heart. And when I have no time to travel for climbing, I still have my project to do. I make my climbing room in my house. It is more torture than fun because I have way closer to c++ than wood and nails, but it is still a perfect relaxation. I am primarily working from home. Thanks to Ashborne and its working policy ;-), so every time I get stuck in a problem, I walk downstairs and take a fresh breath with a chainsaw. No critical injuries so far! 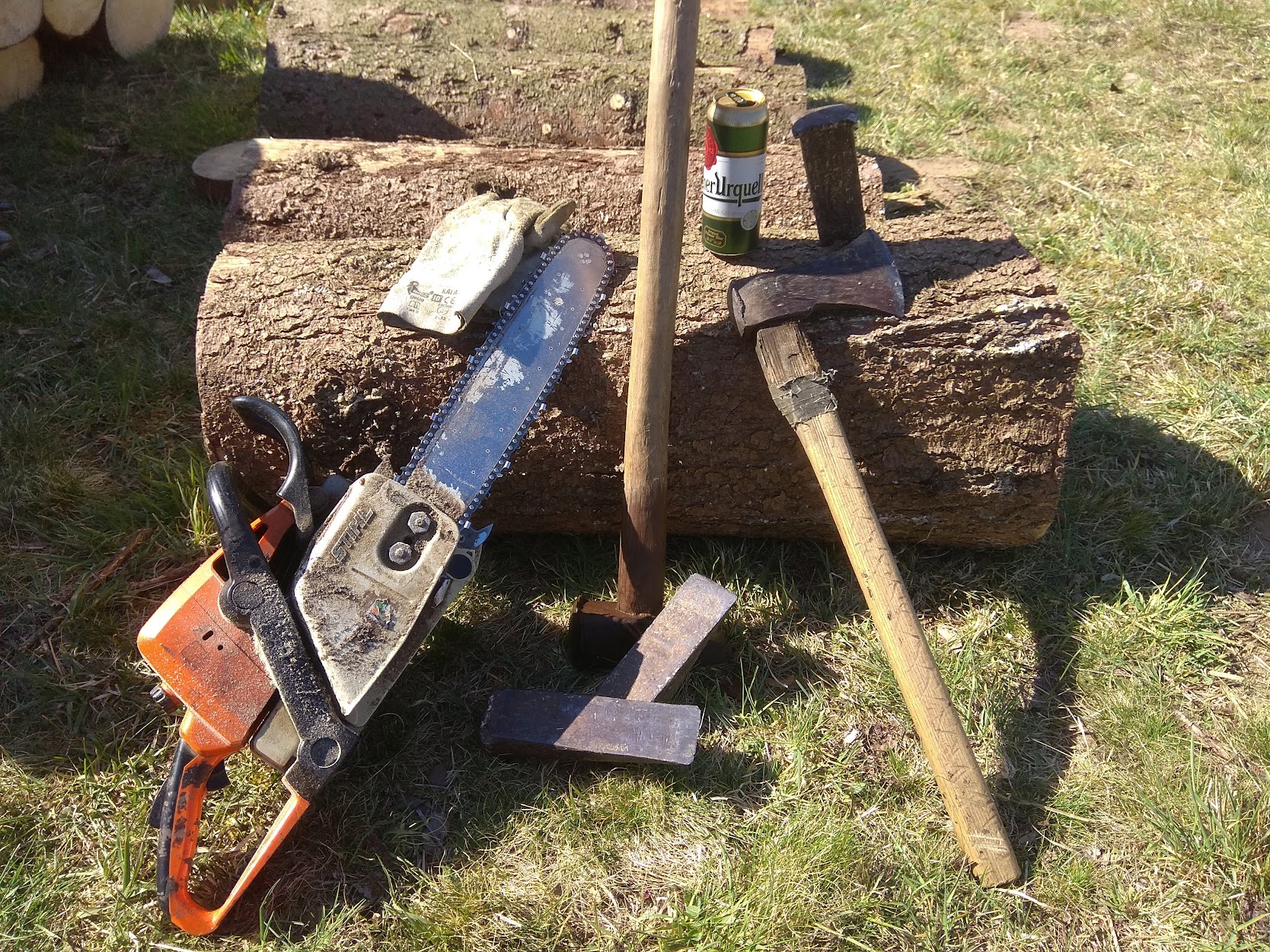 I like punk because you know... Punk is not dead. So if you meet a strange, bold guy at a concert of some crappy local punk band who looks homeless, maybe it is me! Feel free to buy me a beer. And if it was a real stray, buy him a beer as well - be generous. Movies usually mean nap time to me, so I cant serve. I am a huge fan of Family Guy. It is the story of my life, and Peter is my absolute hero. :-)

Quake, Doom, everything in which you can pick a gun and do tatatata.

Something like poker, I would say, and I like poker at the pub with friends. Easy to learn, hard to master. I have no time to study manuals. I want to play. So it is up to developers to onboard me quickly into mechanics and entertain me without much effort.

Shooter with strategic/RPG aspect. Piece of management, strategy, the possibility of taking a gun and being a part of frontal assault, and repeat.

Definitely, I have no longer time for playing games :-D. It is pretty sad because I have more than 300 games on my Steam account, but I have never paid for a single one – I am a developer, so people give me keys for free for no reason. And in those infrequent occasions in which I play games, I have to admit that I found out that I have more joy from catching bugs than playing them. It is my guilty pleasure to assure myself that I am not the only one too lazy to fix a bug and instead call it a feature and hope that no one notices. 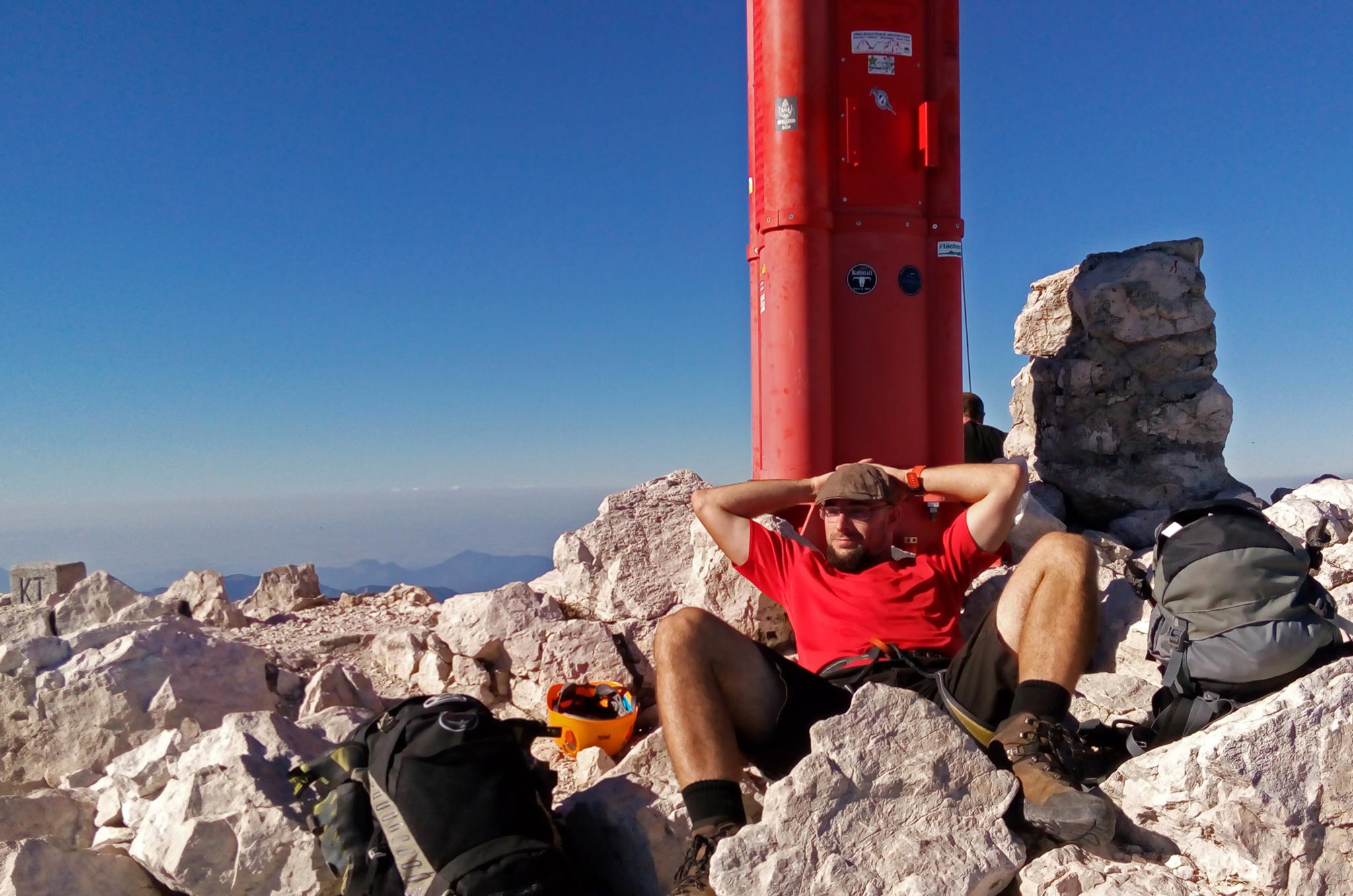 Is there some advice that you would give to gameplay programmers?

Sure! Guys, this is not rocket science. A feature that works 6 to 7 times out of 10 is good enough. 8 makes you an employee of the month. 9 or even worse, 10 out of 10 is a no-go zone. People will get used to it and will demand a similar effort in the next one. So be careful. We are gameplay programmers, which means we are on the sweet spot of the whole game dev universe. Designers are afraid of us. Producers avoid us because we are weirdos in sandals with no idea about the difference between latte and lungo. There is more. Suppose your supervisor assigned you a stupid task that you already did many times and unfortunately have no access to the last project repository or GitHub from which you can steal the solution. In that case, you can always say that it is a perfect task for scripters. And vice versa. If it is too difficult, feel free to tell your boss that it is not gameplay, but a system feature and some engine/PhysX/you named it guy will do it for you, and instead of a punishment, you will get a badge for teamwork.

Question from Miloš Palguta (Art Director): What is your most favorite liquid on earth, and why is it a beer?

Well, I am not classy enough to sip fancy shots, and my demands on wine are pretty high (like most people from South Moravia), so beer it is! ;-)