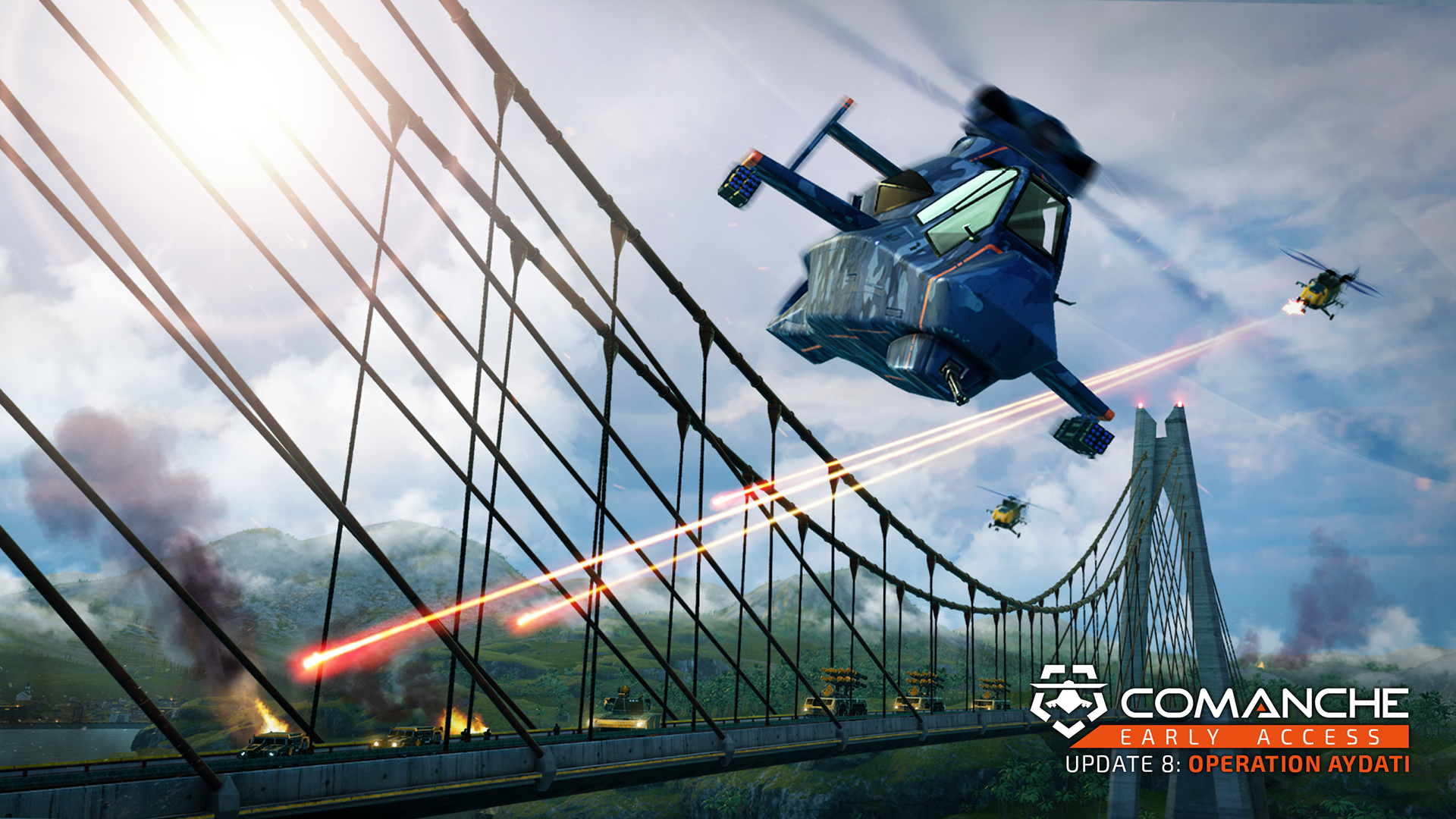 I’m happy to welcome you to the last Comanche Early Access Update 8: Aydati. Thanks to the feedback on Update 7: Conflicts, we could select the best operation for this update. Operation: Aydati leads you back to the Philippines sea, yet on a different location. The local government asked TTF for help in securing one of their harbors taken by enemy forces. Your goal is to support the attack to reclaim the harbor. While completing the mission may be easier than you are used to from previous Conflicts, mastering it and getting all the medals requires more skill and dedication. And there may be more to the name of the said operation in the future. 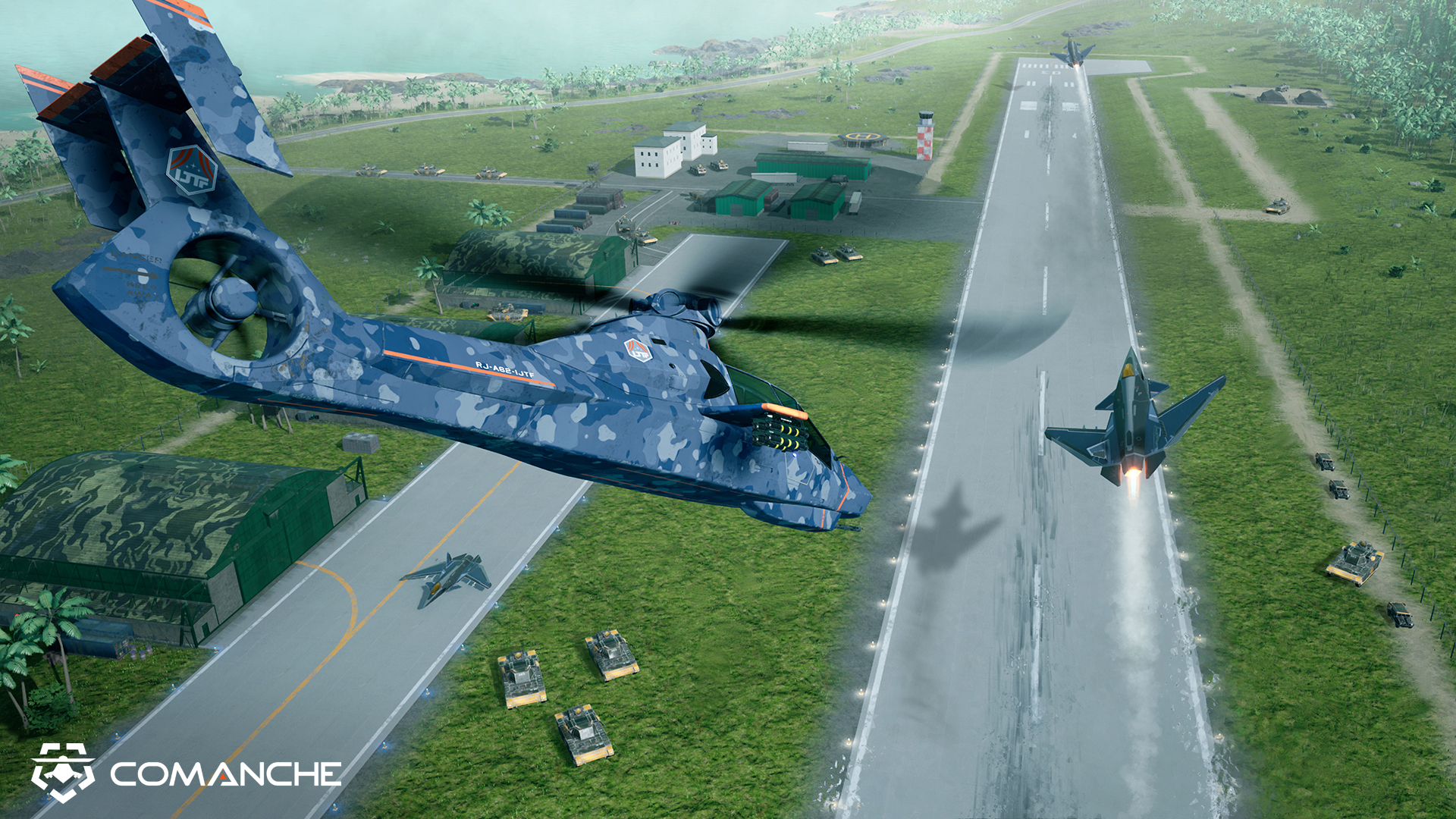 One thing that’s easily notable even before you go to the new Conflict is that Base of Operations got overhauled, and the interface now provides a better way to navigate through the main menu. As part of that, even the campaign menu is reworked to show parts of each operation more clearly. Once you are in the air, you may realize two more changes. Either you pay enough attention to the minimap with enhanced icons, that should allow you to distinguish enemies better. Or you don’t, and you may see a new critical state warning in your cockpit indicates that you are in deep trouble. 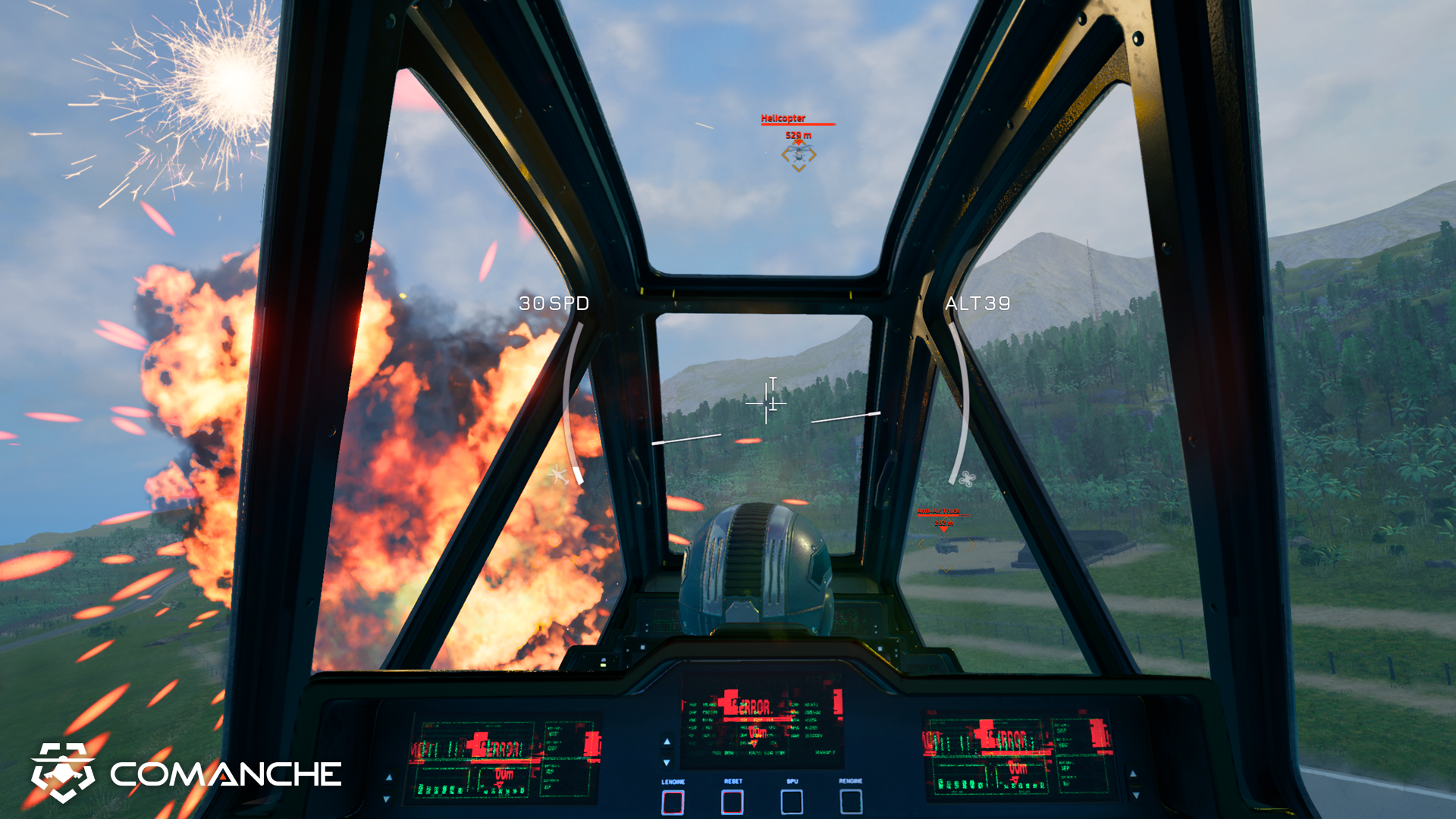 There are more fixes and tweaks, as well as additions. Feel free to check the full changelog for more details. However, I’ll pick just one that may affect most pilots. From now on, you need just three additional medals to unlock Conflict missions, down from four. Speaking of unlocking the Conflicts, we decided to open Operation: Itzal even for people who own the free multiplayer demo on Steam. So they may give the Conflicts a try and determine if they want to get the full game. That means demo players can now play the multiplayer together with other players and enjoy the tutorial and Operation: Itzal. 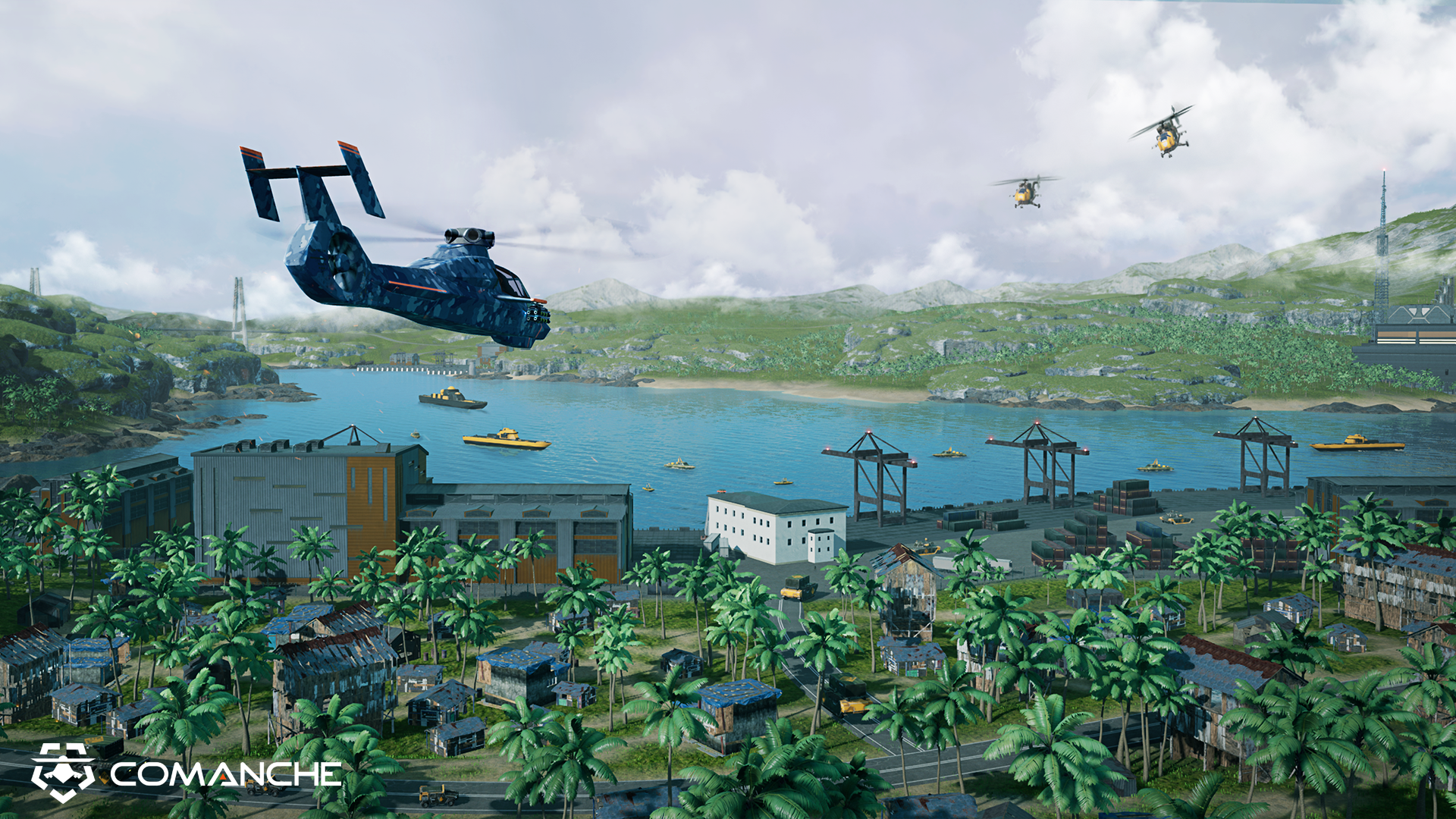 We gathered a ton of helpful information thanks to your feedback after the Conflicts release. It allows us to focus more on finishing the essential bits and pieces for the main release. We decided to get our time to polish everything for the release, and this should be the last Early Access update. Please, feel free to continue with the feedback, it helps us improve the game, and we should have time to incorporate it into the full release. Our goal is to have at least twice as many Conflict missions for the release as we have now, and we will introduce some new enemy units as well. As you can pilot the Prototype Comanche variant in the Conflicts, we want to add even missions with different variants. Also, there are ongoing preparations for Comanche localization into various languages. Although there is a ton of polishing works planned, the game should be in a generally better state once we are finished.

We are looking for your feedback to see if we didn’t miss anything. 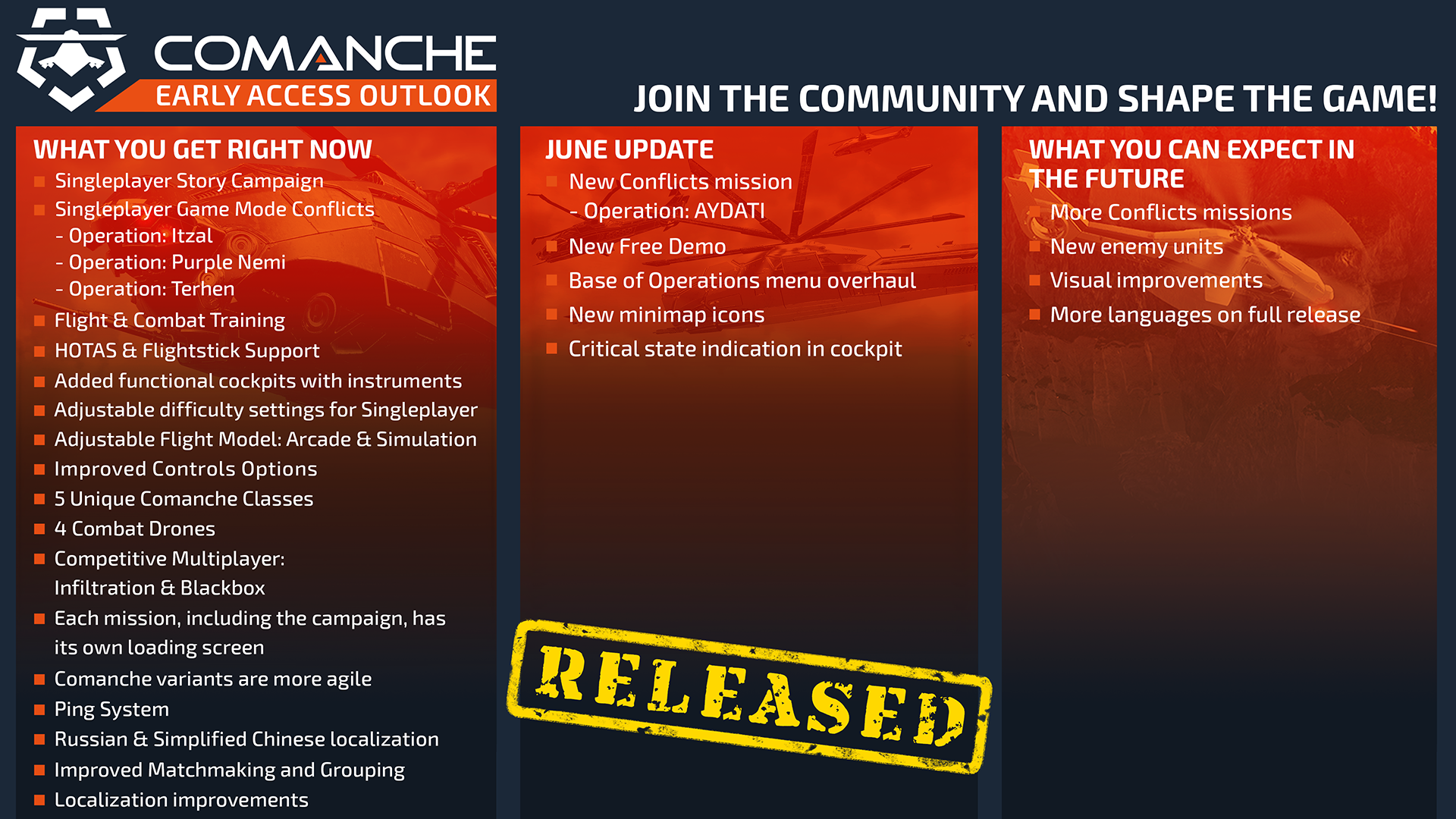